My businessman friend purchased a lake-front apartment in Bangalore. I'll call him Friend-A. While our group of friends was discussing during our usual weekend get together, this friend of mine happened to break the news. Soon, we started discussing Bangalore property costs, and another friend - I'll call him Friend-B - commented that the price of Rs. 3 Cr. Friend-A paid for the apartment was too high in Bangalore.

Friend-B's argument was that he had booked an apartment in Bangalore itself, and he only paid Rs. 90L for it. It was also on lake-front, and had the same carpet area and similar amenities and was from a premium builder.

For a moment, Friend-A was baffled. He had already paid up Rs. 1 Cr. and applied for a loan from the bank for Rs. 2 Cr. Had he paid too much? It then dawned on him to ask Friend-B where he had bought his apartment. As it turns out, Friend-B bought his apartment well outside Bangalore city, bordering a village; while Friend-A's apartment was right in the center of the city. That explained the humongous price difference in both apartments, with almost same amenities and features but different locations.

You might ask why this discussion is relevant to AAP's exposé of Mr. Modi? We'll get to that.

It is also important to know what is meant by "Development Price". This page gives an idea about price of land development, and why sale price is always higher than the actual price of land.

What allegations did AAP make?

AAP contended that Modi had no problem colluding with industrialists & businessmen, but when it came to organisation of national interest like the IAF, Modi showed his real face of a corrupt politician.

These are the two exact sentences from AAP's Pol-Khol:
Modi has allotted 14306 acres (roughly 5.67 crore sq meters) of land to Adanis in Kutch area itself.
AND
Similarly, Modi has allotted land to Adanis in many other parts of Gujarat at throwaway prices.
However, when Indian Air Force asked for land from Modi, IAF was charged 8 times the market rate. IAF was offered 100 acre land at Rs 8800 per sq meter.

The document AAP shared mentions Koba Village where land was given at cheap rate to Rahejas for an IT Park. Since Koba village is in the outskirts of SWAC and Gandhinagar, I would use that as the primary reference.

In the following map, point A is where IAF-SWAC is located and point B is where Koba Village is located with an IT Park functioning now (there was no IT park before land was allotted). SWAC is located well within Gandhinagar city and Koba village is atleast 10 kms from SWAC, in a rural area. You can also check the map here. 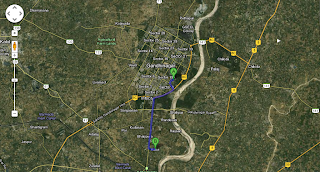 Land rates within Gandhinagar city vary based on the locality, like in any other city. As one moves out of the city and nears villages land rates fall as with any other city.

What did AAP hide?

Following screenshots with important parts highlighted are from documents released by AAP itself:

What is the reality?

Urban land is never valued at the price of rural land, whoever may be the buyer. In this case, very clearly land that IAF asked fell within city limits and land that was given to industrialists at "throwaway price" fell well outside the city limits - in villages. Land allotted to Adani fell in Kutch, a desert area.

Another example mentioned in the documents is of DLF Infocity. But DLF got the land for Rs. 5,000/sqm which was the prevailing rate in that local area, along with additional conditions applied. DLF had to pay full money very next month, failing which they would be charged 18% interest for pending amount.

However, in the end IAF got urban prime land of Rs. 8,800/sqm at a price of Rs. 1,100/sqm. So where is the unethical/immoral action of Mr. Modi that AAP is complaining about?

Was Gujarat govt. wrong in following the procedures as laid down by law?

If Mr. Modi had given land in the same area at a higher price or even same price to IAF than he gave to  industrialists at the same time, then he sure was hand-in-glove with industrialists. Even if industrialists wanted urban land from R&B dept, they would have to pay the prevailing market rates in that area, as DLF already did for their IT Park. That is the procedure.

Aam Aadmi Party's charges were on the assumption that land prices are uniform everywhere and standard procedure should not be followed in land allocation to defense forces. Recent defense land scams have shown that this is a dangerous idea. If AAP comes to power, will they mark land all over the state/country at the same valuation?

Aam Aadmi Party's methods of exposé involve distorting important government communication and hiding key facts from the public. Aam Aadmi Party is a perfect gang of Far-left deception artists & hypnotists who think they can get away by targeting anyone with distorted information.

Do we now know why Aam Aadmi Party never files court cases in issues of corruption? No, it is not because they believe in Janata ki Adaalat (People's Court). Real reason is that they know very well that their cases would fall flat on its face in the court, on both law & morality arguments.

It's still not over. Part 3 is coming up, in which yet another deception that Aam Aadmi Party unleashed will be exposed.