Maths is a tough subject. To derive proof of a theorem, one has to use formula that can't be manipulated. It's very difficult to manufacture proofs in mathematics. For the examiner, there's no need to look at the result derived. Just a look at the a few steps taken to arrive at the answer and you can catch the mischief.

Compare this with social science. Our Social Science curriculum is designed in such a way that we've to write paragraphs of answers. For students who don't study much, just knowing a few revelvant words to throw here and there in paragraph is sufficient to score marks. After all, examiners don't have the time to look at the whole paragraph and assess the content. So mischief makers can easily dupe the examiner.

It's easy to catch mischief in Maths, but extremely difficult in Social Science because of abundance of information. Smart students who knew this trick thus could score pretty decent marks in Social Science while they wouldn't succeed in mathematics with same set of tricks.

How do you use the tricks of Social Science exam in real life? Best use of such trick is in Social Engineering. Let me show you an example. AAP is giving out a lot of information on electricity & water tariff issue in Delhi. Along with its information, they also release bills of some poor people who've been served humongous bills from the authorities. They shared one such bill here. I have copied the same image file and attached below: 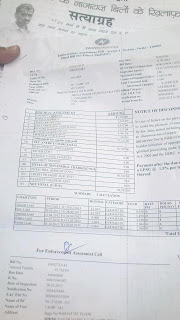 If you read the Facebook post for which I shared in the link above, you will know that this person got a bill of Rs. 93,000. Poor chap. Delhi govt and electricity are indeed sucking is blood. Or are they? Now assume you are a exam paper evaluation expert and find out what information is missing in the answer that you would otherwise be looking for.

If you are done checking, find the answer here.

Here is puzzle number two. Another (water) bill was displayed by AAP that showed a bill of Rs. 36,000. A poor person earning monthly income of Rs. 3,000 was served this bill apparently. Details here. Try to solve this puzzle as well: 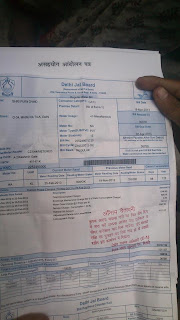 If you are done checking, find the answer here.

Is it common sense that those who don't pay their bills for 1 complete year will get such 'inflated' bills? Or does AAP think that Discoms should wave off the bills of people who don't pay up on time? So who is AAP really fighting for? Those who pay the bill regularly or those who don't?

There is another big promise AAP has made. They are going to reconnect electricity connections of people who haven't paid up their bills. Here is a tweet from Mayank Gandhi himself:

Reconnecting electricity is pretty easy. Any electrician can do it. However, these poor people whose power Mayank Gandhi promises to reconnect will be served court summons. There comes the difficult part. Illegal reconnection of electricity connection is a crime. Will AAP provide legal & financial assistance to all the poor people served notice by the court? AAP hasn't promised this, so Aam Aadmi once caught in legal trap are on their own.

The power of deception

According to AAP, BJP - the principal opposition party NEVER raised any question in the Delhi assembly in the last 3 years on water/power tariff. Check it out yourself from AAP's Facebook post. They have also made this claim in several of their statements.

Now let's see what questions "false opposition" never asked in Delhi assembly. See point no. 22 at 4:49 PM on the last page in this document from Delhi Assembly website. This is from 4th September, 2012.  I have taken a screenshot and attached it here:

Dr. Jagdish Mukhi's is a BJP MLA whose details can be found here.

Here is another question that BJP "never asked" in the assembly in last 3 yrs according to AAP. Read the first page here, from Delhi Assembly website again. This one is from even earlier- 30th August, 2011. I've taken a screenshot and attached it here: 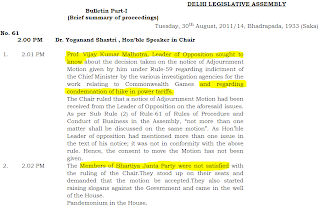 AAP's calendar is probably showing the date of April 1st, 2020 all the time, which is probably why dates of above two assembly proceedings don't fall in the "last 3 years" time period.

There are also links to news report of various agitations done by the principal opposition party on issue of tariff hike. Find them here, here, here and here.

BJP even filed a case against Sheila Dixit govt, and Kejriwal used a BJP forum against DERC hike to launch his electricity agitation in the first place!!

AAP thinks people will just shut their brains and consume anything manufactured by them. They use unpaid bills and show them as unjust & inflated, rewarding people who don't pay bills on time. This is incentivizing those who don't pay their bills at all.

AAP doesn't have a govt just yet, so it's not proven corrupt. But it is right on the path to corruption.

Let's now convert the solution provided by AAP from Social Science format to a Mathematical formula.

Update (08/Apr/2013): AAP has declared that they'll have a group of lawyers fighting cases for free for those served summons by court. Declaration made here.